Warning: Creating default object from empty value in /home/ropeknit/public_html/wp-content/themes/platform/includes/class.layout.php on line 164
 First Sleeve Finished! (Almost) | Rope Knits
Snow Day! 9 Things You Can Do with Gift Wrap (Other Than Wrap Gifts) 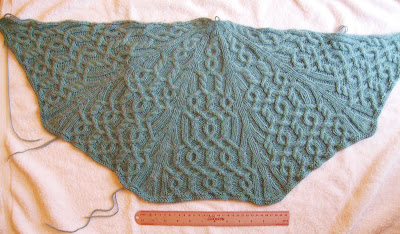 Apologies for the poor lighting. It’s a dull, rainy day with no natural daylight to be found.

Here’s the first sleeve of the Sweater Project, blocking away. I decided to go with the Sheffield yarn in the Lake colorway (which is much prettier than it looks in this photo). The sleeve took three balls/360 yards. I may rip back a few rows and eliminate some of the final increases which I think make it flare out a bit more than it should, but I’ll wait until it’s completely dry before making a final decision.

The shape of the sleeve is based on Jennifer L. Jones’ Half-Circle Shawl which has increases worked every four rows to create four “wedges.” I added a fifth wedge to compensate for the way that the cables pull in the fabric horizontally. The cables themselves are a modification of a pattern I’ve seen in several stitch dictionaries. It takes a little concentration but each wedge is identical so each row is just a matter of doing the same set of stitches five times over. Easier than it looks, in other words.

By the way, is there anyone out there who would be interested in test knitting this for me? It will still be another day or two before I have the chart and instructions for the sleeves ready but knowing someone was waiting to get them would be a good incentive to finish them. I don’t even have notes on the rest of the sweater but I could certainly feed them to you as I work on them. The sleeves are the complicated part, though, so I’d really like to have testing for them underway as soon as I can. Just let me know. You can either e-mail me at sarah [at]ropeknits[dot]com or leave a comment.

Big Kid has been in a play (a little community theater enterprise) and I’ve been able to make good progress on this during her rehearsals. Her performances are this weekend though, and after that it will be harder to find uninterrupted knitting hours–until, that is, we drive to the east coast next weekend. Two full days in the car which I could almost find myself looking forward to except that I know my husband has pesky plans to make me do my share of the driving. Still, I should be able to make some progress. More coming soon!
If you enjoyed this article, please consider sharing it!